The Canadian ice dancers Tessa Virtue and Scott Moir lingered on the rink after their morning warmup on Tuesday, clearly taking in every moment before their final Olympic performance.

They Ensured that it would be one to Remember.

When Virtue and Moir’s training companions Gabriella Papadakis and Guillaume Cizeron set a new world record with a perfect free skate, the pair returned to the ice for one final performance, this time skating to the dramatic tune of “Moulin Rouge.” Each step was in perfect time with the others, and the crowd at Gangneung Ice Arena was clearly moved by the performance. 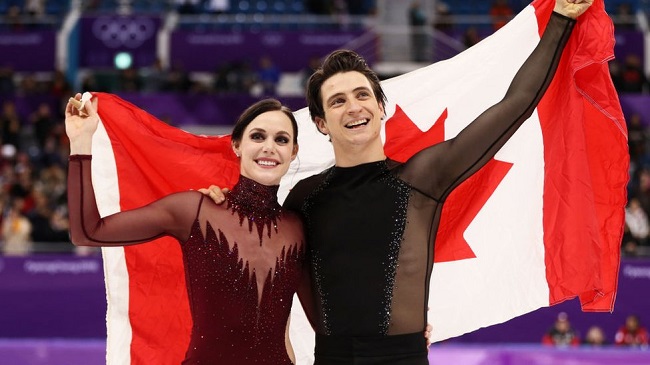 With a score of 206.07, they beat off their French competitors’ 205.28 to become the most decorated pair of figure skaters in Olympic history.

The Best that has Ever Existed, Indeed.

After that setback, they retired for a while, pleased with their historical legacy, but they decided a few years ago to try again for Olympic gold.

“It’s hard to wrap our heads around so close to the event,” Virtue admitted, “but it’s extremely flattering. We owe a great deal of gratitude to the giants who came before us and blazed the trail.

For almost ten years, Virtue and Moir have set the bar as Canada’s most successful ice dance pair. On Monday, they broke the world record for fastest Latin short dance to rock music by carrying the Canadian flag into the opening ceremony.

The new competitors, Papadakis and Cizeron, had a contemporary flair that impressed the judges. They stunned the world with a beautiful, hypnotic performance at the European championships last month after shocking the Canadians in the Grand Prix Final in December.

Their Total of 123.35 Points was Enough to Win First Place.

According to Papadakis, “then there’s nothing further you can do since we did the best we could, an outstanding performance.” As you take it easy, the fun begins.

Despite the pressure, Virtue and Moir delivered a dance in just four minutes that will live on in Olympic legend. Their final lift was a perfect climax to a fantastic performance, and the audience went wild during the throaty, gritty section of “El Tango de Roxanne.”