On July 31, 2021, at Tokyo’s Ariake Urban Sports Park, BMX Freestyle Park qualified for the Olympic Games. Riders, crew, and fans alike had been anticipating the first day’s seeding event, which had been months in the making. Everything lived up to the hype of expectation, from the setting to the unfolding plot. 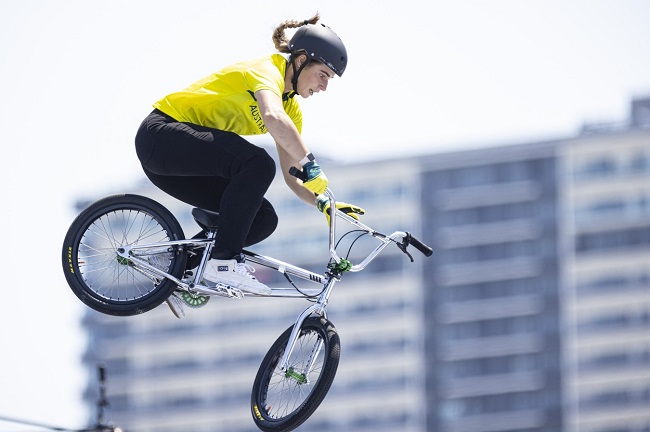 After four days of training in the park, each of the 18 riders got two opportunities to demonstrate their skills. Due to the fact that points from both runs would be added together to determine the final score, it was crucial to do well in both.

Saturday’s competition turned into a tactical game between the nine female and nine male riders as the seeding phase was utilised to set the starting order for the Olympic Final, with the highest score rider starting last. The ladies rode first, so the spectators in the grandstands saw some remarkable feats right off the bat.

Macarena Perez of Chile made headlines as the first woman to compete in BMX Freestyle Park at the Olympics.

One of the best parts of competing is having the opportunity to bike the full course by yourself. Natalya Diehm of Australia scored 77.40 points on the board for her first run, which included 360s and tailwhips. These feats are increasingly commonplace in women’s contests due to the rising calibre of competitors.

Charlotte Worthington (GBR) has made remarkable improvements in her training under the guidance of coach Jamie Bestwick, and it is amazing to see how far one can come over time.

The present riders benefit from the knowledge of former professionals as they learn how to improve their performance. With a lot of help from Daniel Wedemeijer, Nikita Ducarroz was able to perform backflips, tailwhips, 360s, and 540s.

The Swiss rider qualified in third place, putting her in position to win an Olympic medal if her performance in the finals matches her seeding.

Seeding Men Who are Sending it

Ariake Urban Sports Park is a fantastic playing field with a wide variety of lines and ramps of varying heights. Athletes are given a wide range of possibilities, and it is up to them to come up with the most remarkable runs possible under these constraints.

Each rider’s best run of two will be used to determine their final seed, rather than an average, so they have nothing to lose by going for broke.

Anthony Jeanjean went first and established a high standard for the other seven men to try and match. The Frenchman has two strong runs, full of flairs in various parts of the course and more tailwhips than many spectators could count, giving him an excellent chance of making it to the Olympic Finals.

Nick Bruce decided to take it easy in the hopes that his sore shoulder would be fully recovered in time for the final and he could then lead the United States to victory.8 Thanks for reading our article Bmx Freestyle Park Olympic Games Tokyo 2020.